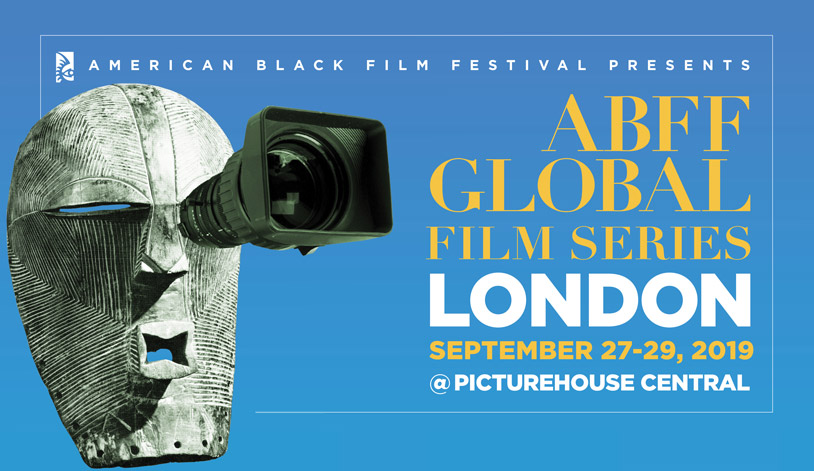 The American Black Film Festival (ABFF) is proud to make its historic entrance into the UK September 27-29, 2019 staging the first installment of its Global Film Series at Picturehouse Central in London in partnership with Sony Pictures Entertainment and in association with Screen Nation. Read press release…

See below for film screenings and ticketing info.

In 2016 the Oscar Film Academy committed to double its membership of women and minorities by 2020. Over the last 20 years black film festivals and award shows have provided platforms for filmmakers and actors of African descent who have later gone on to gain recognition and win awards at the Oscars, Golden Globes and BAFTA.

Film festivals and award-shows that focus on recognising and showcasing under-represented groups have widened the selection of films seen on screens by audiences hungry for stories that provide them with a new perspective or represent their experience. The panellists will discuss the strategies they deployed to create a space for storytellers from the African diaspora to access Hollywood; how investors can identify projects from new voices and emerging filmmakers can create their own ‘blue oceans’ to get their stories seen and heard.

Summer is a carefree, black teenage girl whose world is turned upside down when her mother abruptly converts to Islam and becomes a different person. At first resistant to the faith, she begins to reevaluate her identity after becoming attracted to a Muslim classmate, crossing the thin line between physical desire and piety.

In the last days of her mother’s life, 19-yearold Tiffany crashes with five family members in a Las Vegas studio apartment. In order to make ends meet, her older sister, a phone sex operator, introduces her to the world of internet fetish cam girls.

Based on the writer/director’s childhood, this is the story of a young Nigerian boy ‘farmed out’ by his parents to a white British family in the hope of a better future. Instead, he becomes the feared leader of a white skinhead gang.

15-year-old Manny Bennitt learns the hard way the price of being cool.

Grief can be overwhelming for just us to tackle alone.

An aging fisherman goes out to sea one day and returns with a talking fish.

Recently homeless and living in a car with her mother, a teenage girl commits a reckless act, desperate to rescue a vestige of their former life.

Trainers break gender, cultural and class backgrounds. Collectors, Inspectors and respecters of sneakers, affectionately known as “sneakerheads” can come from any background, race or religion, all with one common purpose, the appreciation of trainer culture. With the UK Sportswear Market worth Billions, this documentary will chart the highs and lows of the culture in the UK.

Q&A moderated by: Anthony Andrews, We Are Parable

A story about love, forgiveness, sisterhood and second chances.

ABOUT ABFF GLOBAL FILM SERIES:
ABFF Global Film Series (ABFF Global) is an international screening series and extension of the American Black Film Festival (ABFF), the premier event in the United States showcasing the work of content creators of African descent. The series mission is to promote the universal appeal of films by and about people of color and encourage collaboration between content creators throughout the African Diaspora, with the objective of expanding distribution opportunities for black content on an international scale. The ABFF Global Film Series will visit other major cultural hubs, after London, including Madrid, Cape Town and Paris in 2020.

ABOUT SCREEN NATION
The Screen Nation Film & TV Awards, formerly the bfm (black filmmaker) Film and TV Awards, was founded in September 2003 by independent film producer Charles Thompson MBE as a platform to raise the profile of black British and international film and television talent of African heritage. The awards ceremony – dubbed the “Black BAFTAs brings together actors, actresses, directors and filmmakers from the British and international film and TV industry.