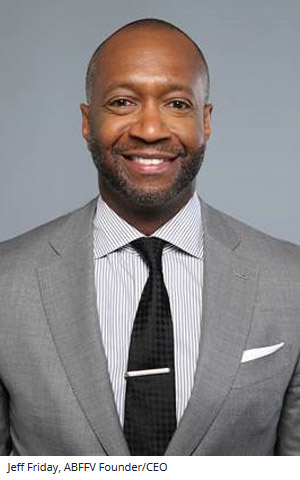 Jeff Friday is one of the most innovative entrepreneurs in the film and television industry today. A successful producer, festival founder, film financier, champion of diversity and mentor to many, Friday has established a unique legacy in Hollywood, generating a tremendous amount of goodwill within the creative and corporate communities.

Twenty-four years ago, following his first trip to Sundance Film Festival, an inspired Friday took a blind leap of faith. Departing from his lucrative job as president of the prominent multicultural advertising agency UniWorld, Friday devoted his professional life to the American Black Film Festival (ABFF). Recognized today as the leading film festival of its kind, ABFF remains the premiere platform that introduces filmmakers of color to the industry at large and has created opportunities for people of color outside of Hollywood’s doors by helping them find their inroad. To further ABFF’s legacy, in 2019, the Smithsonian National Museum of African American History & Culture (NMAAHC) in Washington D.C. acquired ABFF photographs and other archival materials to be included in its permanent collection.

Having curated hundreds of hours of content, Friday developed an acute skill for identifying promising new talent. His work put a spotlight on many of today’s successful new artists, introducing them to the industry when they were unknowns. That spotlight showcased the early work of many of today’s most talented and recognizable artists, content creators, and stand-up comedians.