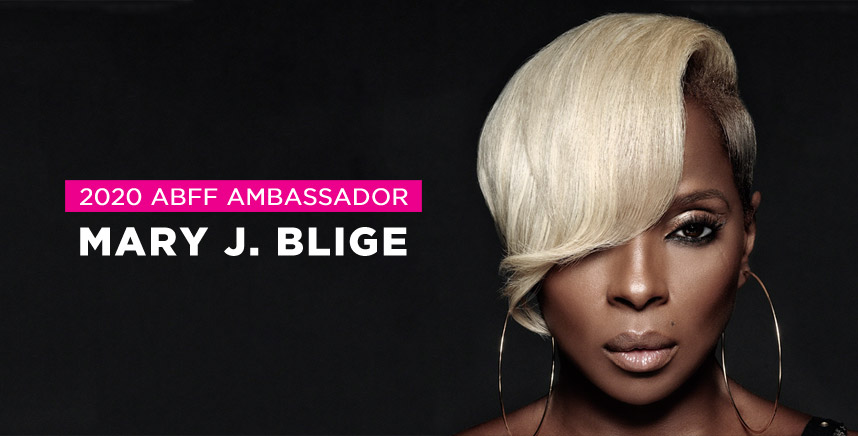 LOS ANGELES, CA, (March 3, 2020) – ABFF Ventures LLC., today announced iconic Grammy Award® winning and Academy Award® nominated singer, songwriter, actress, producer and philanthropist Mary J. Blige as the ambassador for the 2020 American Black Film Festival (ABFF), which will be held in Miami Beach June 17 – 21, 2020. As ambassador, Blige will help bring media awareness to the ABFF’s mission and its 24-year legacy, as well as headline a one-on-one conversation during the Center Stage Talk series on Thursday, June 18th. The discussion will spotlight Blige’s music career, her transition into film and television and her life’s journey as one of the most successful artists of all time.

“So many incredibly talented Black filmmakers have come out of the American Black Film Festival, many of whom I’ve had the pleasure to work with and many I can’t wait to collaborate with. As an actress and producer, there couldn’t be a more important event to be a part of. I am a longtime supporter and admirer of ABFF and I am honored to be an ambassador and continue to help foster new talent,” said Blige.

Mary J. Blige is a figure of inspiration, transformation and empowerment making her one of the defining voices of the contemporary music era. With a track record of eight multi-platinum albums, nine Grammy Awards (plus a staggering 32 nominations), two Academy Award nominations, two Golden Globe Award® nominations, and a Screen Actors Guild Award® nomination, among many other accolades, Blige has cemented herself as a global superstar. Blige will star in Dreamworks’ Trolls World Tour movie, which is set to release this April, as well as MGM’s Aretha Franklin biopic, Respect, which is set to release this October. She also stars as Monet in Power Book II: Ghost, a spin-off of hit STARZ show, Power, debuting this Summer. Under her production company, Blue Butterfly, she is currently in production on an untitled documentary about her life and legendary career directed by Vanessa Roth.

“Mary J. Blige is a hip hop legend whose artistry has transcended into the film and TV industries. Her body of work personifies the ABFF mission, which is to celebrate and uplift the African American community through entertainment,” said Nicole Friday, General Manager of ABFF Ventures.

Going into its 24th year, ABFF’s dynamic program continues to evolve. In 2020 it will expand to include the John Singleton Award for Best First Feature Film; “ABFF Fit,” the festival’s new health and wellness initiative programming; and “ABFF Pride,” this year’s social impact showcase theme centered on the Black LGBTQIA community. In addition, the National Museum of African American History and Culture (NMAAHC) in Washington, D.C., recently acquired ABFF photographs and other archival materials to be included in its permanent collection. With the support of the world’s leading entertainment, media and consumer product companies, the festival continues to lead the way promoting diversity in the motion picture and television industries.

ABFF remains committed to introducing emerging content creators of African descent to the industry at large and is recognized as one of the leading film festivals in the world. Festival passes are on sale now at www.abff.com, and offer three different levels of access to the Festival. Questions regarding registration, sponsorship and programming, should be directed to info@abffventures.com. The 2020 Festival will continue the annual celebration of highlighting Black filmmakers. Attendees will enjoy celebrity conversations, panels, master classes, spotlight screenings and independent films and more. Presenting sponsors include HBO (Founding), Greater Miami Convention & Visitors Bureau, and WarnerMedia.

ABOUT ABFF:
The American Black Film Festival (ABFF) is an annual event dedicated to recognizing black talent and showcasing quality film and television content by and about people of African descent. Dedicated to the belief that diverse artists deserve the same opportunities as their mainstream counterparts, ABFF founder Jeff Friday conceived the festival in 1997 as a vehicle to strengthen the black entertainment community by fostering resource sharing, education and artistic collaboration.

After 23 years, the festival has become a cornerstone of diversity in Hollywood, providing a platform for emerging black artists — many of who have become today’s most successful actors, producers, writers, directors and stand-up comedians, including Ryan Coogler (Black Panther), Will Packer (“Girls Trip”), Issa Rae (“Insecure”), Kevin Hart (“Night School”), Omari Hardwick (“Power”) and Steven Caple Jr. (“Creed II”). The ABFF is the preeminent pipeline for black artists in front of and behind the camera, and has significantly expanded the range of talent working in the entertainment Industry.

As “the nation’s largest gathering of black film and television enthusiasts” the ABFF attracts a broad audience of celebrity talent, emerging artists, upscale consumers and industry stakeholders. Approximately 7,000 to 10,000 people travel to Miami Beach each year for the five-day event. The festival opens with the premiere of an upcoming Hollywood release followed by a full schedule of intriguing independent film screenings, master classes, panels, celebrity talks, live entertainment, and a variety of networking and hospitality events.

ABOUT ABFF VENTURES:
ABFF Ventures LLC (ABFFV) is a multifaceted entertainment company specializing in the production of live events and branded content. Its mission is to entertain and inspire communities of color while promoting diversity in Hollywood. Headquartered in Los Angeles, ABFFV was formed to stimulate business growth through expansion into other events and services. Its tent-pole properties are the American Black Film Festival (ABFF), cited by MovieMaker magazine as “One of the Coolest Festivals in the World;” and “ABFF Honors,” an annual awards gala saluting the top stars of film and television. In creating ABFF Ventures, CEO Jeff Friday channeled his passion for film and television, as well as his discomfort with the underrepresentation of people of color in Hollywood, into an organization with the ultimate goal of advocating for diversity within the entertainment industry. Through his vision and perseverance, ABFF Ventures has become a highly respected enterprise, generating goodwill throughout the Hollywood and corporate communities.

RELATED POSTS
2020 American Black Film Festival Wraps with Celebration of Winning Films and Filmmakers via ‘The Best of The ABFF Awards’ABFF MiamiAugust 31, 2020September 11, 2020

August 31, 2020September 11, 20202020 American Black Film Festival Wraps with Celebration of Winning Films and Filmmakers via ‘The Best of The ABFF Awards’

IMDb To Simulcast The Best of the ABFF Awards Ceremony On August 30 LOS ANGELES,...